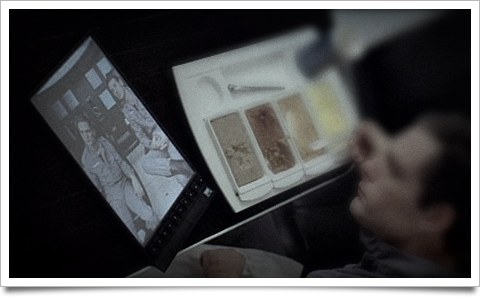 «[…] Floyd sometimes wondered if the Newspad, and the fantastic technology behind it, was the last word in man’s quest for perfect communications. Here he was, far out in space, speeding away from Earth at thousands of miles an hour, yet in a few milliseconds he could see the headlines of any newspaper he pleased. (That very word «newspaper», of course, was an anachronistic hangover into the age of electronics.) The text was updated automatically on every hour; even if one read only the English versions, one could spend an entire lifetime doing nothing but absorbing the ever-changing flow of information from the news satellites.

It was hard to imagine how the system could be improved or made more convenient. But sooner or later, Floyd guessed, it would pass away, to be replaced by something as unimaginable as the Newspad itself would have been to Caxton or Gutenberg. […]»

[hat tip to gruber, cinema fist and boing boing — and no, I did the image before I saw their articles, how I read before w/o seeing their images? I read (via feed reader) gruber, decided to blog it, did the image work, looked who’s to credit for … and was surprised by the same images — and there are more shots to choose from.]

This entry was posted in design. Bookmark the permalink.